Uh, I think I’ve watched one or two things…

It was OK. I have a hard time parsing my feelings for this one. On the one hand, I like that it wasn’t an explicitly feminist story — it was there, but more as subtext. And it was quietly radical to have women in so many of the lead roles. But on the other hand, I think her arc might’ve been stronger if the feminist themes were foregrounded.

(spoilers from here out)

There’s also an interesting anti-colonialist element. At one point she realizes the people she’s been working for are imperialists engaged in literal genocide. It’s pretty ballsy of Marvel to put out a movie where a white American woman realizes she’s complicit. (But we’re talking about aliens, so it’s OK. Don’t read the subtext.)

My biggest complaint is that the ending sucked. As soon as she got her powers, it should’ve been over. Keep her refusal to fight the guy, ax the stupid spaceship, done.

I don’t think I’ve ever actually seen the Marx Brothers before. Thanks to the Sneaky Dragon podcast’s Full Marx sidecast, I decided to give them a watch.

I love it so much. They reached seven years a few months ago, so I tweeted all this:

Hey @ericfell , congratulations on seven years of the Critical Hit Show! I've been a fan since the very first show, back when the Rio was fighting the provincial government to be able to sell beer and show movies. #dndlive

Also thanks to the @RioTheatre for being a great venue, and also for the Big Kids Combo, which makes me happy everything I order it. #dndlive

Also thanks to the @RioTheatre for being a great venue, and also for the Big Kids Combo, which makes me happy everything I order it. #dndlive

When I left Canada for two years, my overseas Canadian friends all missed stuff like ketchup chips, Kraft dinner, and so on. I missed exactly two things: poutine and the Critical Hit Show. #dndlive

So... thanks for everything, and maybe -- some day -- the city of Tarkendale will finally be at peace! #dndlive

I think I’ve been to all their shows so far this year. Whee… 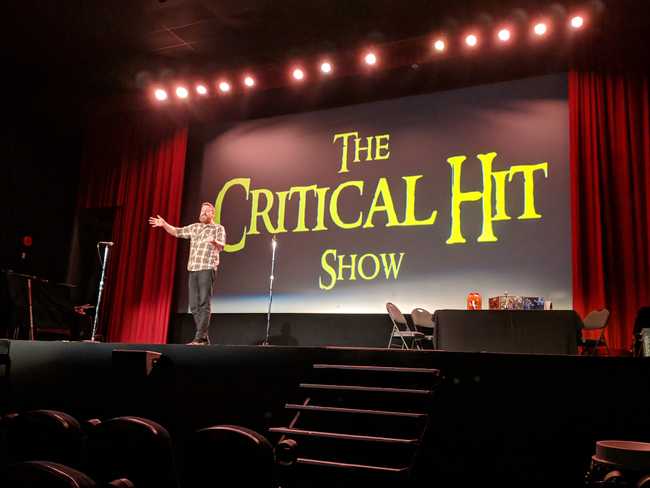 I’ve been back a couple of times, mostly with Gavin. The last show had a large (high school?) group from Alberta, to whom the performers shamelessly pandered. It’s good times!

My cousin came to town and played a show! It was good stuff. Very… art-pop, I think that’s a genre. Think pop music, except harp-driven instead of guitar-driven. Check her out on Bandcamp. 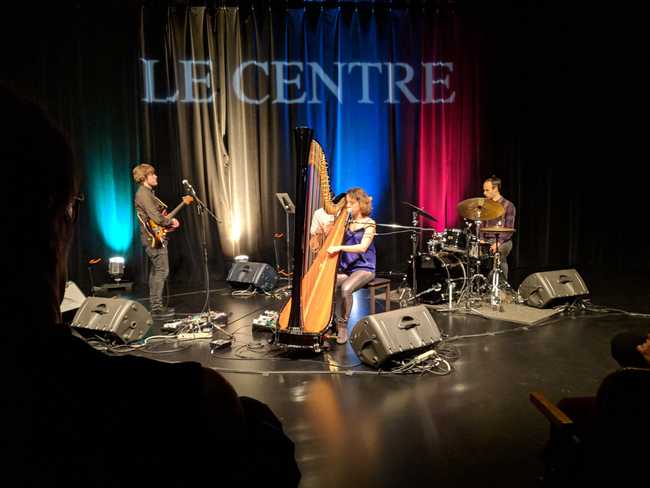 Comedy show! English comedien! I swear half the audience were British. She mentioned Mark & Spencers and got a big “WOO!” from the audience, which… I guess if I were still in Dublin and saw a Canadian comedian in a crowd of Canadians, I’d probably cheer Tim Hortons and the Bay. It was still weird. But very funny. 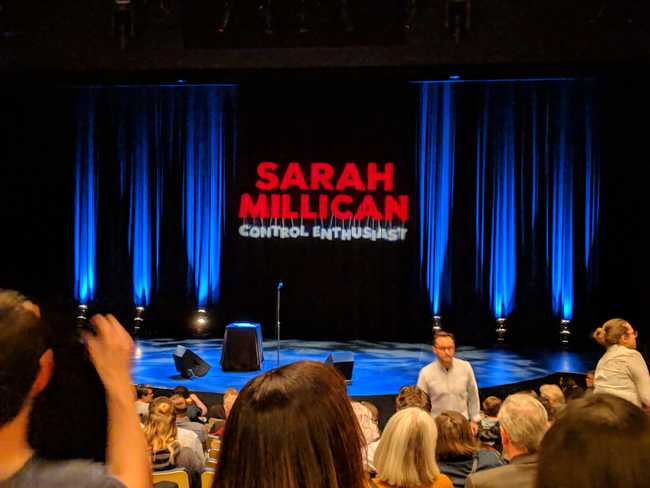 Part of Celticfest. It was a good performance, but I couldn’t help but think that some of the songs were meant to be sung in the pub, not a fancy cathedral. There was one point that a fiddler, pianist, and singer got a sesh going, but it was more them performing for us versus anything communal, if that makes sense.

I got there late and missed most of it, but I had to go and pick up a copy. He was at Book Warehouse to promote his book Falling For London. A memoir (I’m not sure that’s the right genre, but close enough) about a Canadian’s experiences living overseas? Yes please.

(To my shame, I haven’t actually read it yet. It’s been a month. Oh, my backlog…)

My gaming group had been alternating between two different campaigns, a D&D 5e game and a GURPS fantasy game. The DM for the latter game burned out (it happens), so, after saying I should do it for like a year, I finally offered to run a game. More specifically, I started running a pirate-themed adventure using the Savage Worlds system.

I’m definitely rusty, and there have been plenty of events that I wish I’d prepared more for, or done something differently. The group seems to be having a lot of fun. I get a little anxious while running things, but it’s also exciting.

So when I say finally, I mean this has been nearly five years in the making.

I’ve been going to Nodeschool meetups for a while. A few months ago I actually hosted one of the meetups at work. My experience was mostly going up and down the elevators repeatedly. It went well.

Work also took us all snowshoeing, which was my first time. Tiring, but fun.

I didn’t manage to keep cycling to work last fall, but I’ve been making an effort to get back into the routine. And Gavin’s taken me out for a few rides, mostly along the seawall. It’s nice living somewhere with cycling infrastructure.

I made a snowman

Not a good snowman, but there was so much snow at šxʷƛ̓ənəq Xwtl’e7énḵ Square when I was walking home one night, and I couldn’t help myself. It was frankly surreal making a snowman in the middle of city centre. 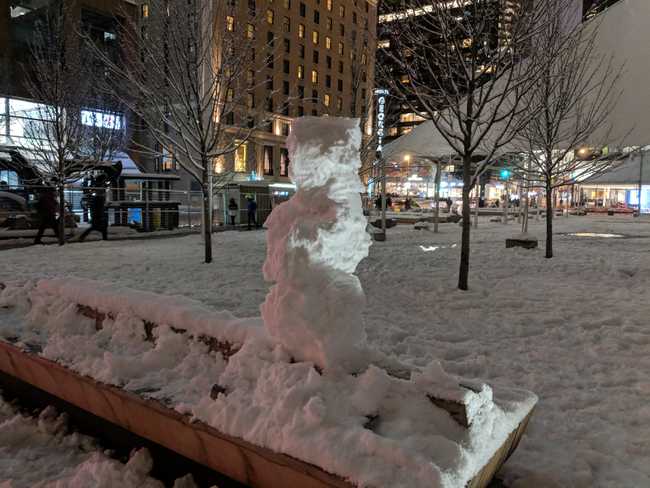