Like I said last time, Dublin 2019: An Irish Worldcon was my big excuse to back. This was my second experience going to WorldCon, the first being Loncon 3 back in 2014. There I became a pre-supporter for the Dublin 2019 bid, learned how to say slainte, and had an experience so amazing that I apparently didn’t write anything about it here.1

I’ve been poking at this blog for over ten years now, people.

The short version of Loncon: It was overwhelming. There were something like 10 000 people there (according to Wikipedia, just under 8 000). It went for five days. I only attended three, then hung out with some friends in London for the next week, but it was really something, and I was looking forward to experiencing another one.

My other sci-fi/fantasy con experience is the local con, VCON, with attendance somewhere between 100 and 200 people, I’d guess. It’s cozy and fun, but at the other end of the spectrum from Loncon. (Also, to my disappointment, it’s cancelled this year.)

These are my points of comparison for Dublin 2019.

So… it was good, on the whole. I haven’t said it nearly enough, but the organizers and the volunteers were fantastic. They made a huge effort at accessibility for people with disabilities, recruited loads of panelists who weren’t white dudes, put up inclusivity notices in the washrooms, etc. They did have issues with the captioning software used for the Hugo Awards (it was funny, but disrespectful); they’ve since apologized and vowed to redo the captions properly. (As far as I can tell, they haven’t done so yet.)

Nevertheless, five days is a long time, and I was relieved to call it quits on Monday afternoon. That left me with four more days in Dublin. Woo! 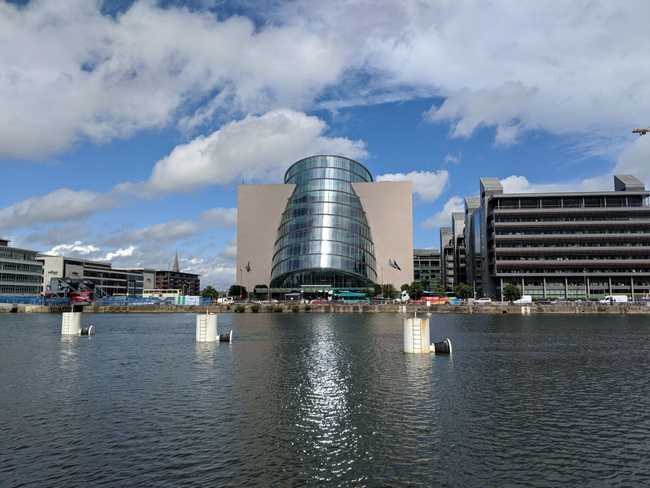 The Convention Centre Dublin from across the River Liffey. It’s not the greatest shot, but so it goes. 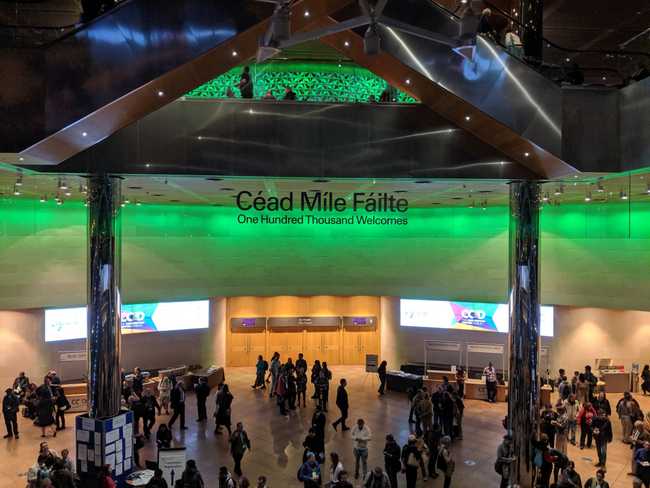 The lobby inside CCD. 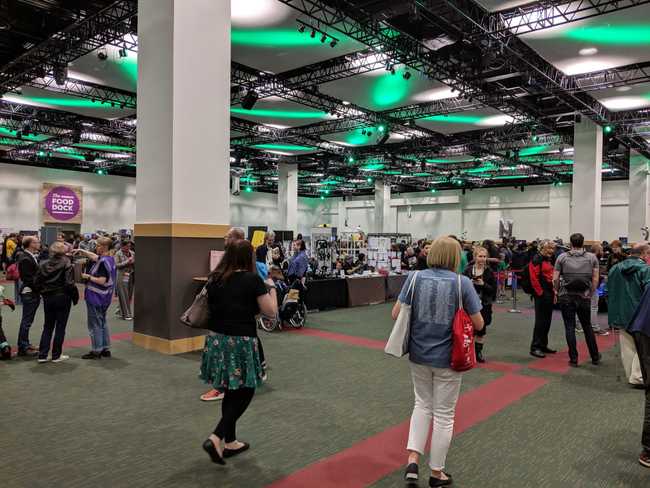 The dealers area. Busy enough, yeah? I’m not sure what I expected, maybe something like the expo hall at PAX. 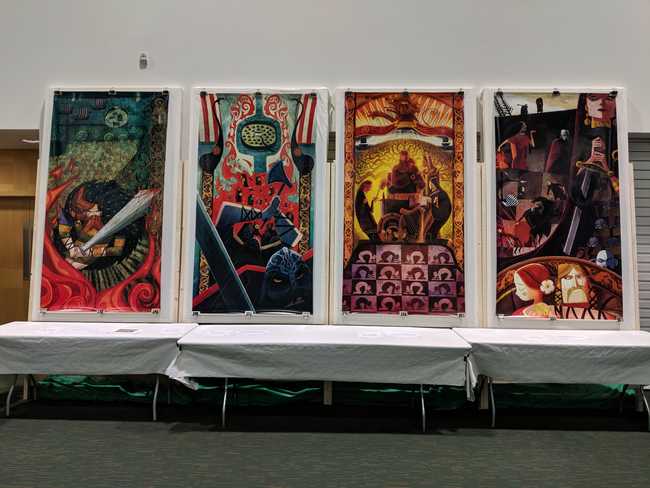 This was along one of the walls and tells the story of Brian Boru, the High King of Ireland who defeated the Vikings at the Battle of Clontarf in 1014. (Well, OK, that’s an extremely simplified view of things, but it did end Norse dominance over Ireland.) 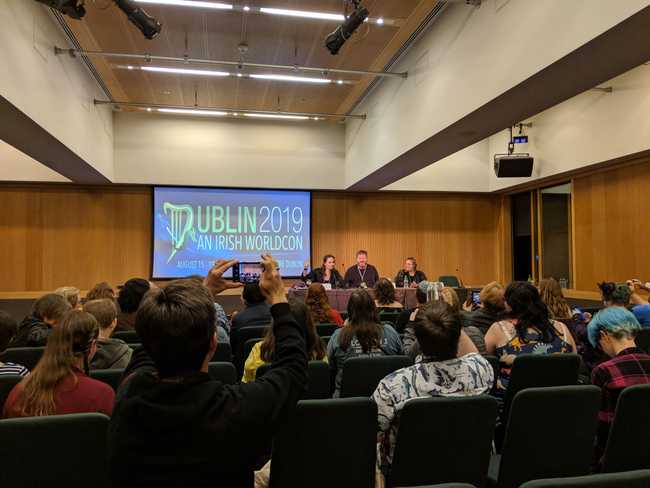 This was at one of the panels, I think about fandom and social media. 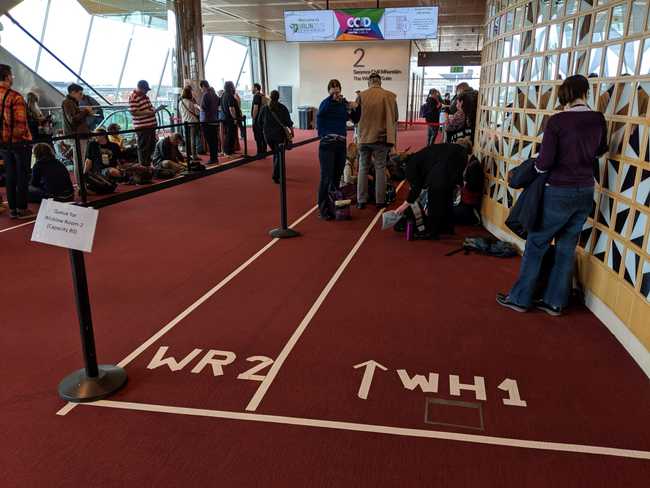 See? Making the best of a bad situation. Also, the mirror wall on the right opens up to reveal a hidden bar, and that’s where I got my 5 Lamps pint on the trip. 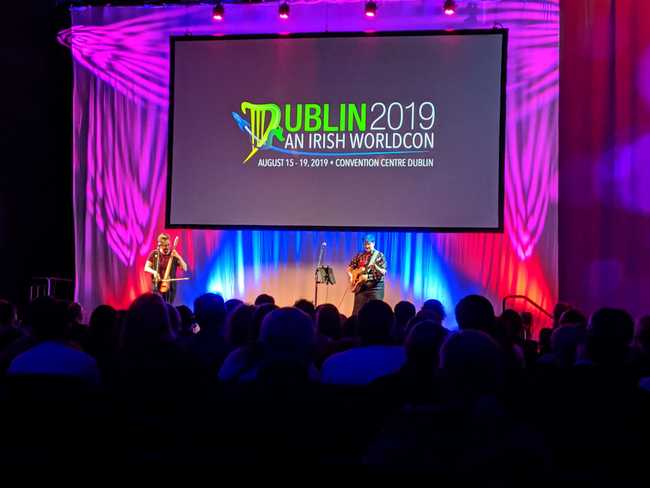 Oh, right, I saw The Doubleclicks perform. I caught their last song. It was good, tho! 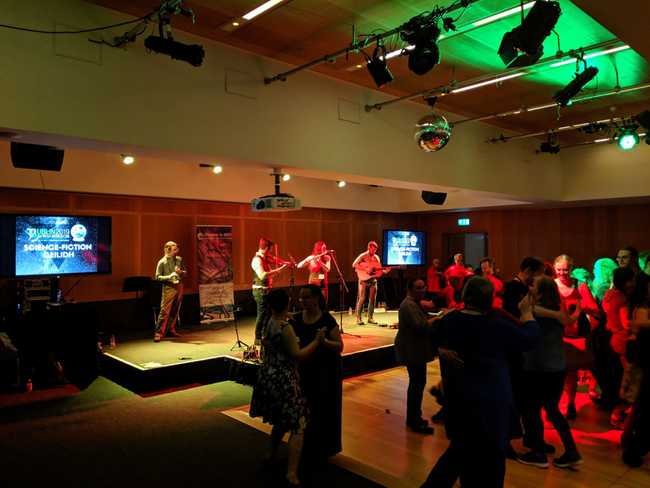 See? A ceilidh! I popped in, smiled, took a picture from the corner of the room, and slunk back out. 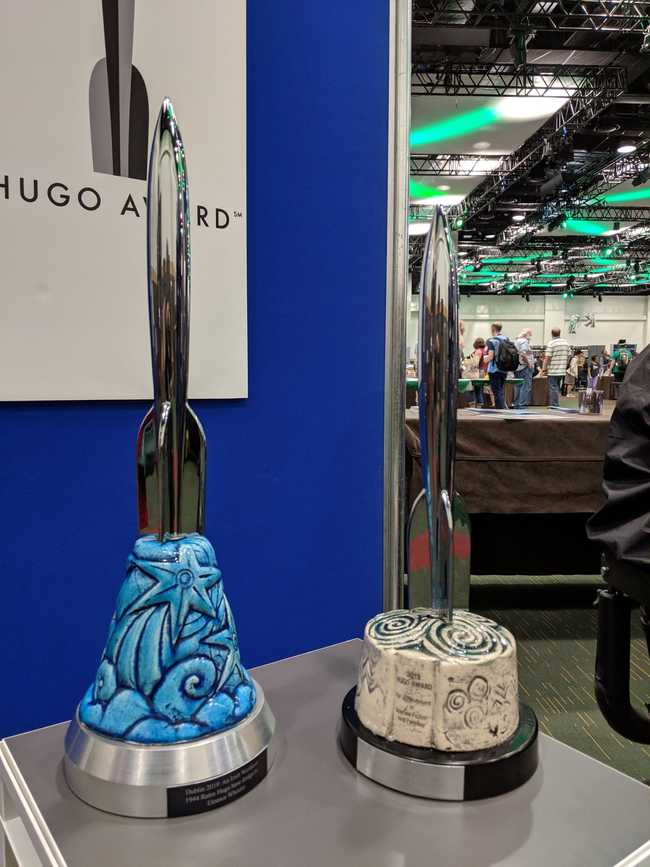 The actual Hugo Awards for the year. The one on the left is for the retro Hugos; the one on the right for this year’s. The bases are ceramic, and the one of the right is covered in Celtic symbols, like the tri-spiral symbol from Newgrange. 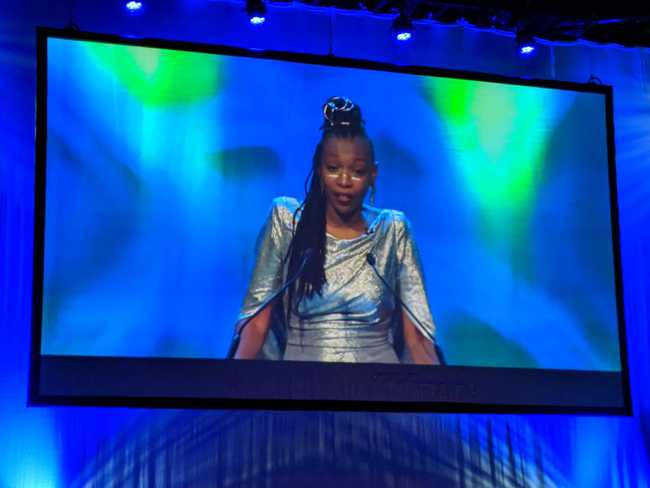 Michael Scott was a good co-host, but Afua Richardson was amazing. And she sang and played the flute during the ceremony. DAG. 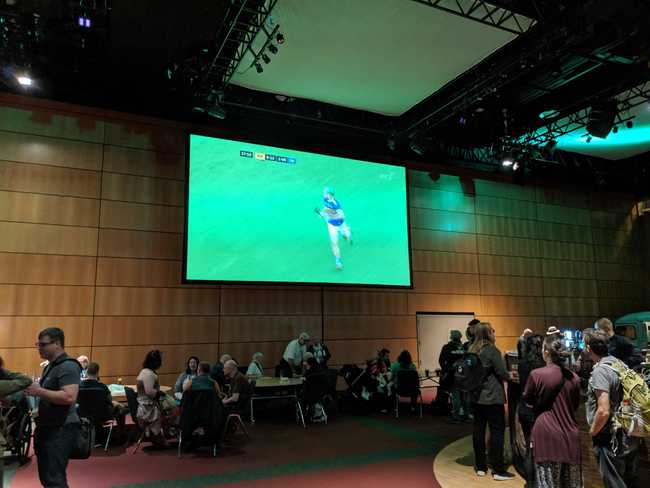 You can’t take pictures of the stuff in the art gallery, but there were a series of Lego dioramas in front. Here’s the French Quarter under attack. 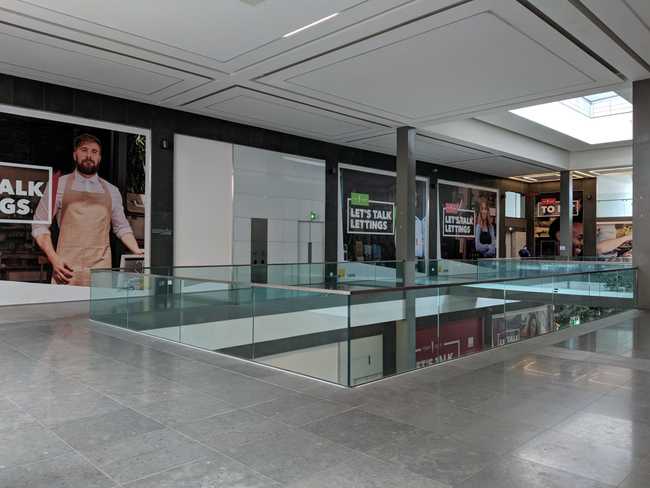 The overflow venues was in Point Square, which is basically a shopping mall. It’s the Dublin version of Tinseltown: a fancy-looking place with a lot of vacancies. 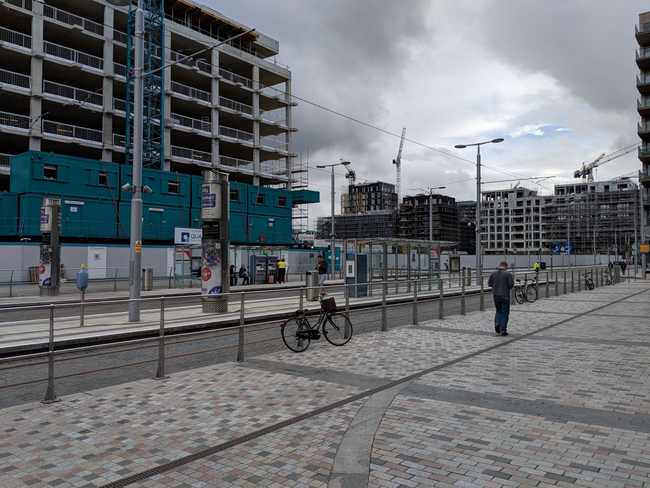 Unlike Tinseltown, it’s not because it’s a sketchy area. This part of the Docklands is under insane development. And these buildings are going to hold multinational tech companies. It’s the most soulless part of Dublin. 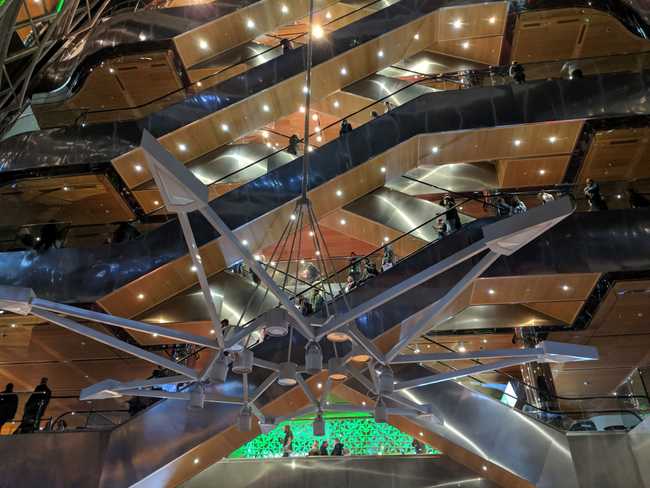 The escalators inside CCD. This is in the front, on the other side of the big curved windows. 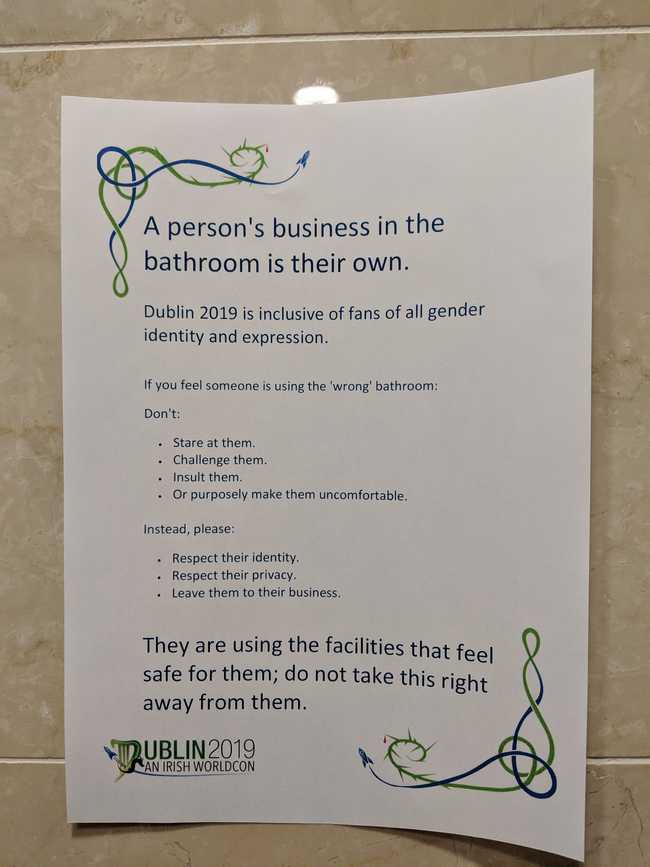 They had these signs in the washrooms. They made a good effort at inclusivity, IMO. 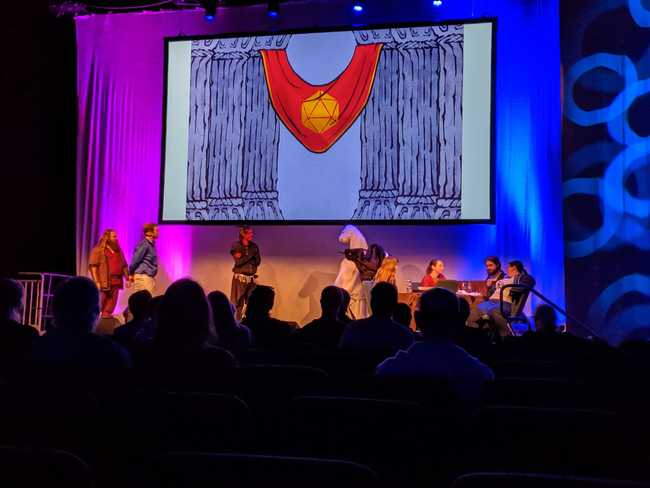 @A Critical Miss. Zounds! What manner of creature hath approached the party?